If you’ve been around for a while you may have seen some of the dramatic play setups I have prepared for my girls. They love imaginative play and I love watching them learn and develop their social skills, literacy and numeracy skills while they play.

This week I want to show you our new Post Office dramatic play space. The girls have really enjoyed this one and there’s so much you can replicate in your own home, with or without our printables. 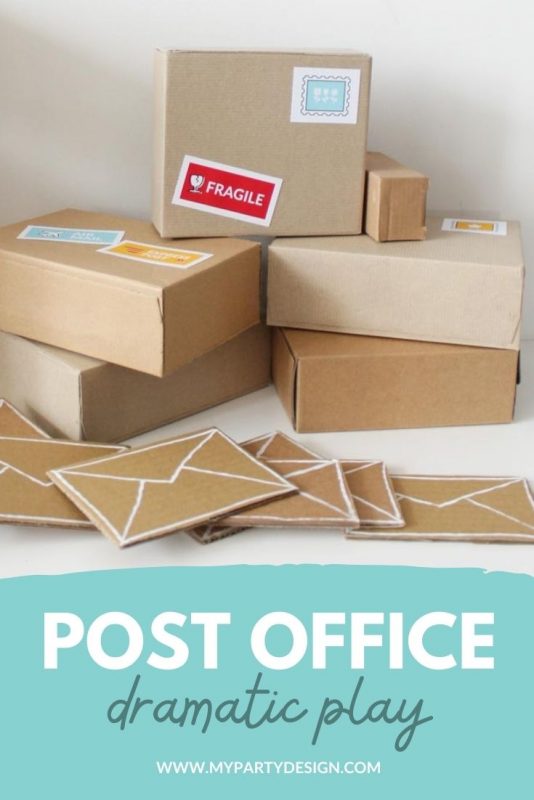 I like to set up our dramatic play spaces using our Ikea Play Kitchen as a base. I just turn it around and add a sign to the back panel. For this reason, my printable dramatic play kits always include a sign that will fit the panel of the Ikea play kitchen, but also an A4 size that you can use if you don’t have one. 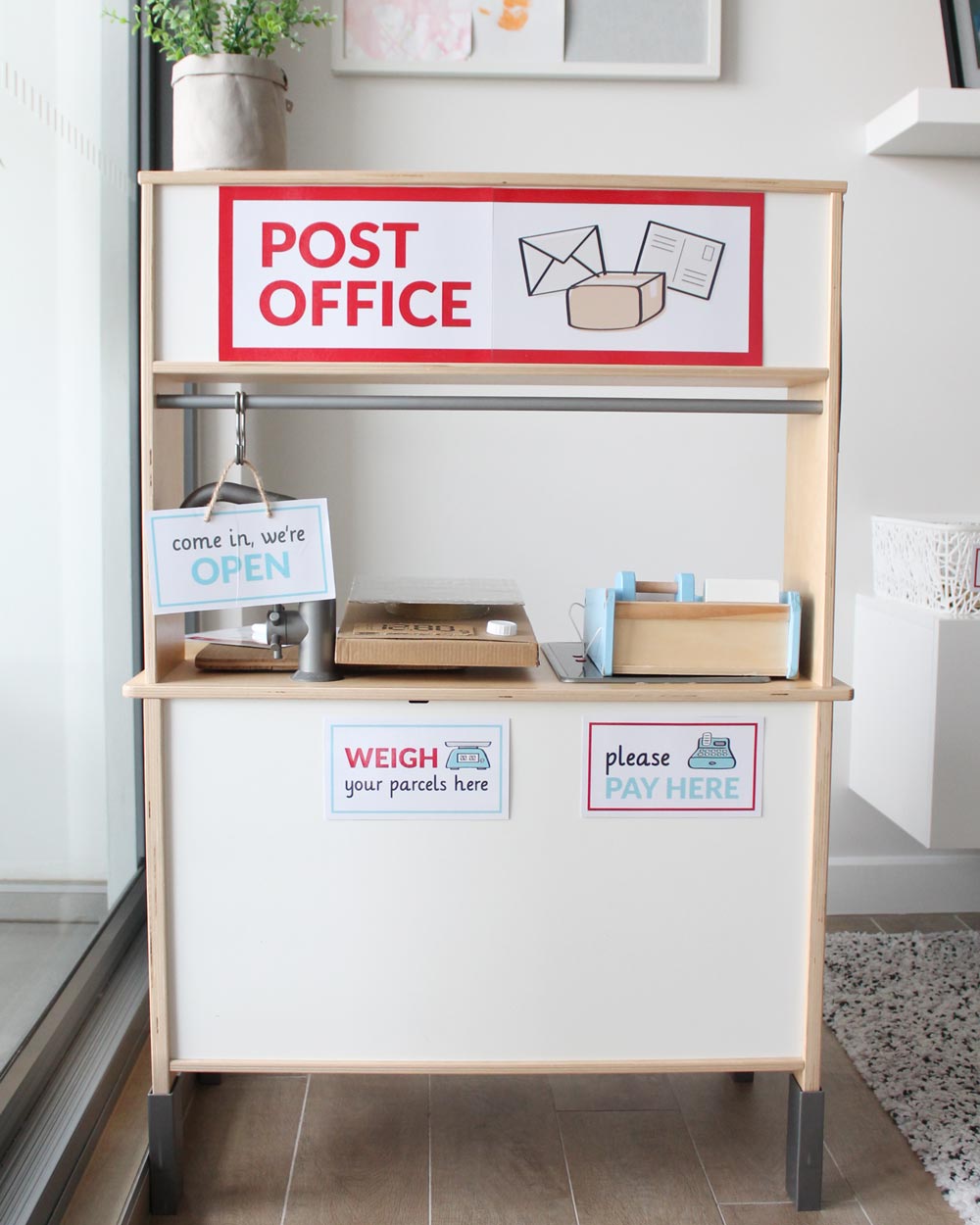 To encourage writing and communication, I added a Post Office checklist form that I laminated for the kids to use with a whiteboard marker. There was also a price list and themed signs around our Post Office setup. 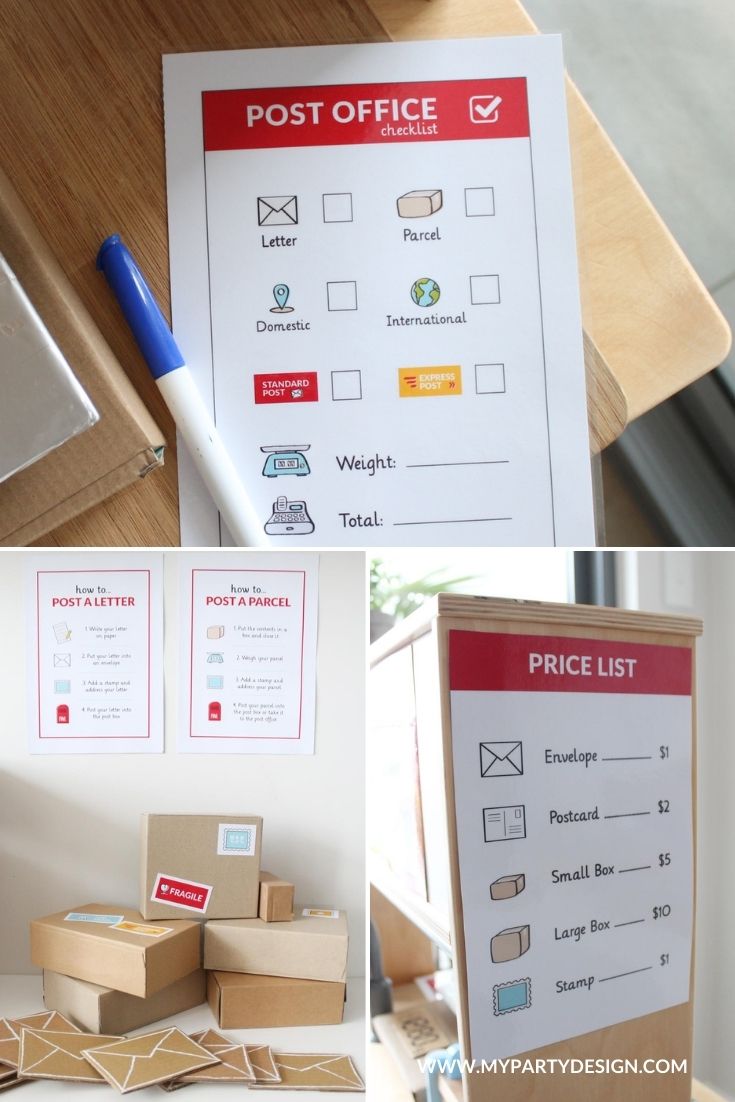 There was a fair bit of DIY involved in creating this space. I actually love repurposing old cardboard boxes and making toys out of them, because there’s no guilt in recycling them when the kids lose interest after a bit of play.

I made our post box by cutting a large cardboard box with narrow openings for letters (there’s one on the other side for express post) and a large one for parcels at the front. Then I cut a little door for the ‘mailman’ to collect the mail and added a baby food pouch lid as a handle. This box has been played with so much and it’s probably the favourite part of our Post Office dramatic play scene! 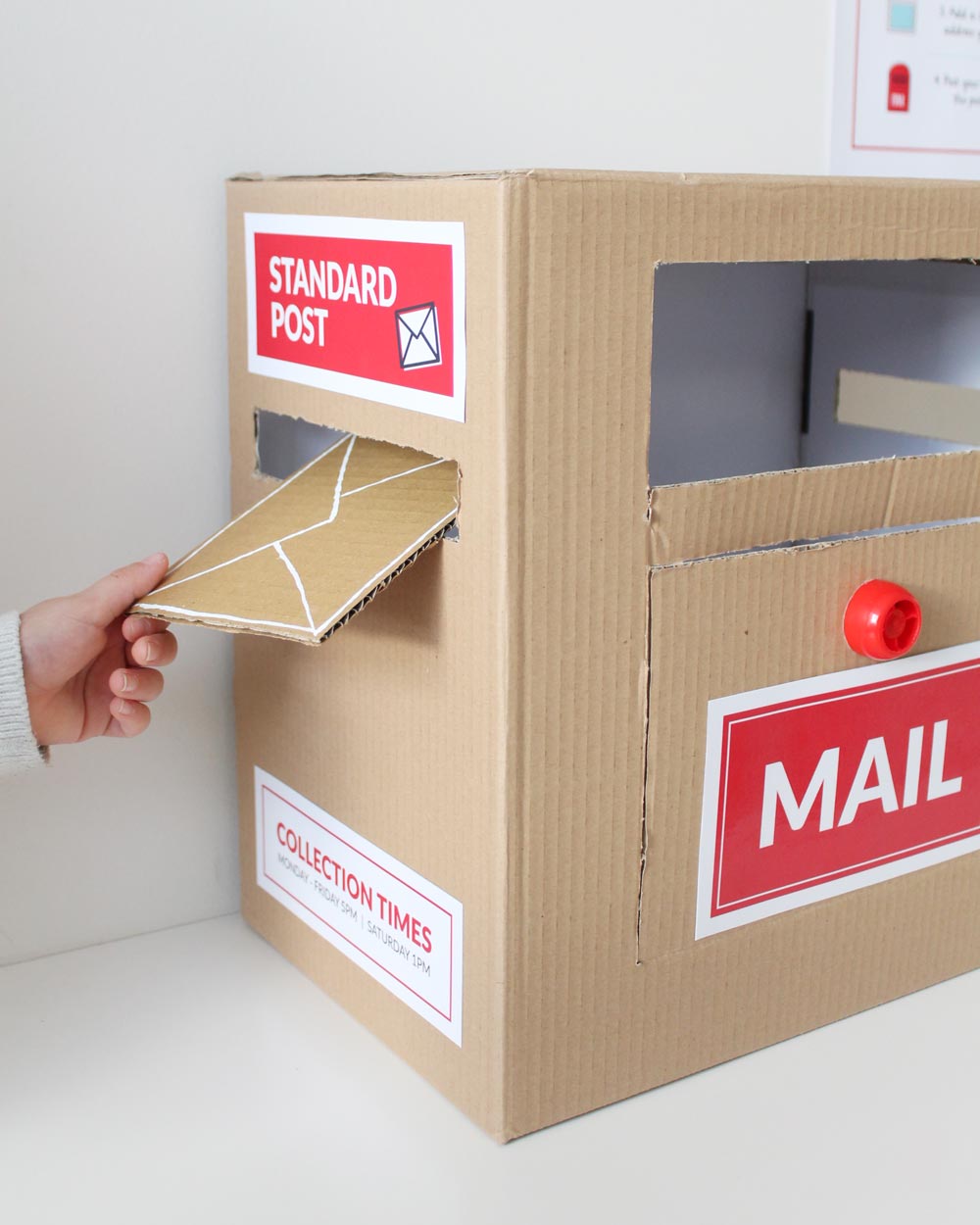 We also made pretend parcels using smaller boxes and putting some stamps and stickers on them. The letters were just rectangular pieces of cardboard that I outlined with white a correction pen. These were great and sturdy for my toddler to post over and over.

And I even made a scale out of a tilted cardboard box so they could pretend to weigh their parcels.

The girls loves posting letters and parcels into the letter box, collecting all the mail and sorting it into different baskets. 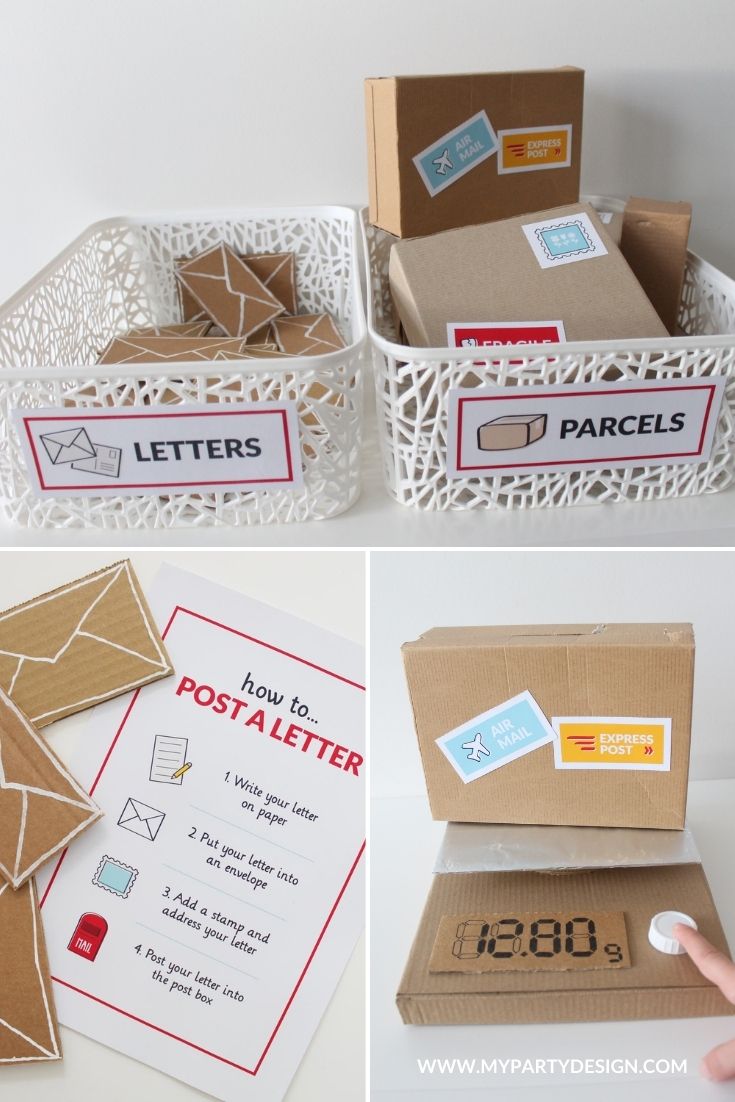 My eldest is 5 years old and loves to practice writing so for her I set up a small letter writing station with blank paper and postcards, envelopes, stamps and stickers. These are great for preschoolers and older children, even if they’re not writing yet it’s always a good idea to provide them with opportunities to try and practice holding a pen and scribbling on paper. 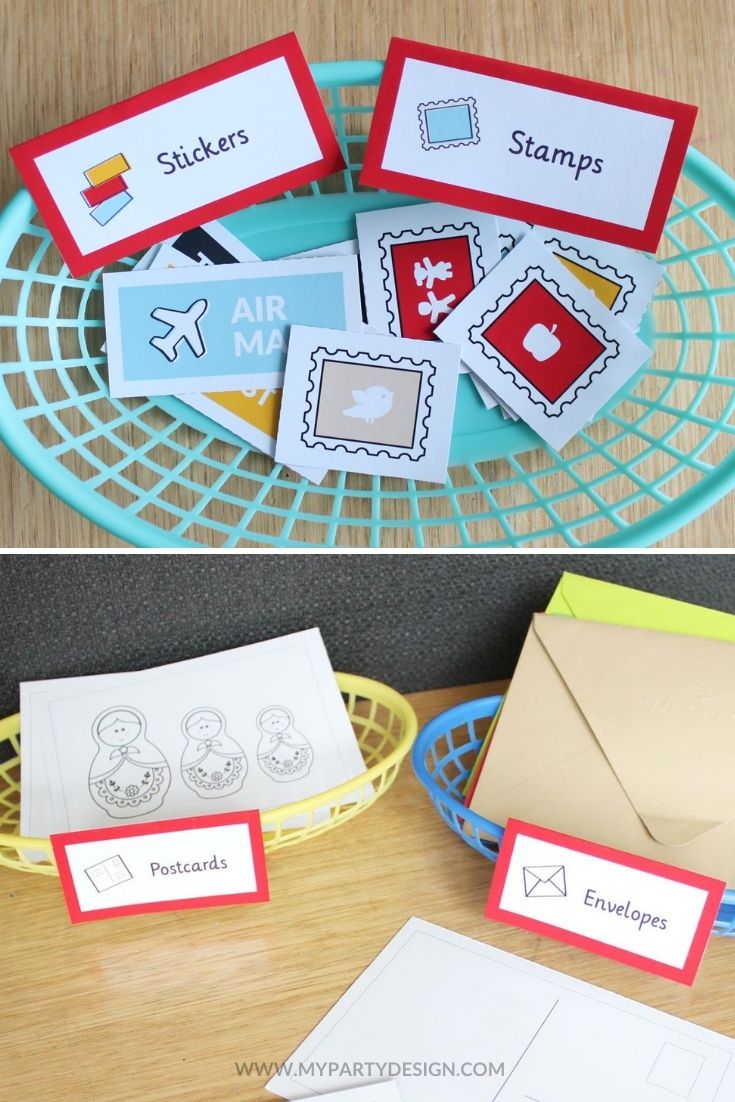 I hope this post inspired you to create a new play experience for your little ones.

If you’d like to set up a play space like this one, you can grab our Post Office Dramatic Play Printables that includes all the signs, labels and forms shown in the photos. Or check our Dramatic Play section for other imaginative play printables! 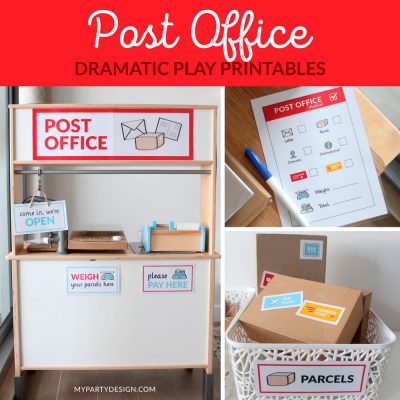 Don’t forget to tag @mypartydesign on Instagram if you use any of our printables, I would love to see your dramatic play spaces! 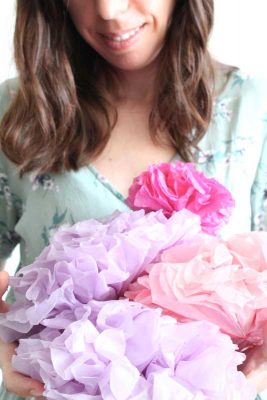 Hi! I’m Cristina, a mum of 2 little girls, a graphic designer and lover of all things party!
I create fun printables and show you how you can use them to style the cutest handmade parties for your loved ones ♥